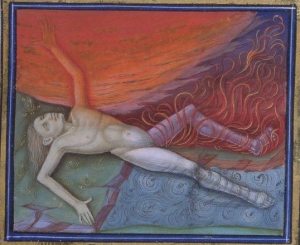 At a recent conference, I was approached by an Oxford don of many summers who took exception to my use of the term emotions as an analytical construct in a paper I had delivered earlier that day. Without being at all patronizing, he spoke of his concerns about using a category that, to his way of thinking, was so entirely modern, that it could not capture the particular nuances in thinking about and feeling through “whatever it was that they actually did in the medieval period.” He advocated the use of the term passions instead, which, he reminded me, was the main category and paradigm used throughout the middle ages. Our conversation was cut short at that point by the start of the next conference session, but what this venerable professor said to me has often given me pause for thought since then.

Leaving aside the issue of anachronism, it would be easy to discard his advice on the grounds that it would be theoretically unsophisticated to think that we could only use in the aid of historical analysis those terms and paradigms that were in use during the period we were investigating, and only as they were then used. Such a thought would be just as problematic for Marxist and Gender scholars as it would be for those from the History of Emotions. While there were indeed medieval ways of defining and describing the passions, their workings and functions, the concepts encoded by the term passions were subject to change over time, much the same way that those encoded by the term emotions have altered over the few hundred years since the word was first used, and are still subject to debate today.

But maybe…(!) the Oxford don still had a point. Maybe something in what he said captures the vaguely perplexed looks of other historians new to the field of the History of Emotions when, intrigued as they are, they encounter an eager yet callow researcher enthusing about their work. Maybe something of it rings true when we fumble for ways to describe what we’re seeing in our medieval sources, and we find ourselves interchangeably drawing on the terms emotions, feelings and passions… While one might be quick to point out in one’s work that they’re not suggesting these terms be taken as equivalents, including as equivalents for medieval affective states, but something “like” each other for the purpose of analysis, the lack of clarity on this front still rankles. Just maybe, in our efforts to “write without fear” about emotions in history, we have become a little complacent about our use of the term emotions and the assumptions we make about its analytical capabilities.

Two weeks ago I had the pleasure of attending an informal seminar led by Professor Louis Charland, who is currently visiting the Centre for the History of Emotions at UWA, and who tackled these issues head-on with a small group of keen postgraduates also connected with CHE.   Professor Charland, who holds cross postings in Philosophy, Psychiatry, and Health Sciences at the University of Western Ontario, began by asking us what we thought about the anachronism implicit when studying “emotions” in the medieval and early modern eras. This was a terrific ice-breaker, as after the initial discomfort akin to having someone’s dirty laundry aired, discussion flowed freely about the necessity of making assumptions in our work, but the need to be clear about it when we do so.  For instance, it is ok to talk about emotions in history, so long as it is clear that we are using the term as a theoretical category. But, Charland challenged us, it is not ok to presume that the term can be used as a coverall for all affective states, now or in the past. Indeed, theoretically, the category of emotions is having a tough time doing all the work that is currently ascribed to it. Prof Charland is perhaps best known for his compelling, if a little controversial, argument that we need to reinstate the passions as a serious psychological and theoretical category.

Two points drive Charland’s theorising. The first is his concern that not enough attention has been paid to the ways ‘that efforts to regulate the emotions are invariably susceptible to moral undertow,’ that is, that they are ‘tied to value and morality’, something that many current theories of the emotions are not that apt to grapple with.[1] The second is his belief that ‘a satisfactory theory of emotion regulation must invoke something like Ribot’s modern concept of passion as organized emotion.’[2] Théodule Armand Ribot was a psychological theorist writing around the end of the nineteenth century, who was troubled by the term passions falling out of favour and its replacement solely by the category of emotions. Working with Ribot’s ideas, Charland proposes that the concept of the passions be used in order to augment current methods of affective analysis and, especially, to help explain those aspects of affective life that current concepts of the emotions struggle to.  Charland is not suggesting that we embrace the passions because the term has greater historical relevance to the medieval and early modern period; far from it. He is acutely aware of and sensitive to the changes over time in the concepts encoded by both the terms passions and emotions.

For Charland, as for Ribot before him, the concept of the passions represents the highest, and possibly the most mediated form of affective being. In contrast to emotions,

“passions are long term, complex and dynamic, affective orientations to the world that move the organism in accordance with a stable goal, or ‘fixed idea’ (idée fixe). Passions both direct and mobilize the organism to act according to certain goals or priorities. To achieve these ends, passions must organize feelings and emotions accordingly. Passions can vary in duration, intensity and complexity. In general however, passions are of longer duration than either emotions or feelings.”[3]

I came away from Charland’s seminar with my mind abuzz at the thought of revisiting some of my better known primary sources to see if I could find and trace any interplay between emotions and an organizing passion. Of course, employing the concept of passions alongside emotions  does not dispense entirely with the historiographical issues, yet it seems that a more holistic approach is gradually opening up. Will these propositions help to clarify the mixes of emotions, passions and feelings I read in my historical texts, and the influence that medieval moral world-views had on them? This remains to be seen, but I’m excited by the possibilities so far.

2 thoughts on “On Emotions and Passions: Being Clear about Analytical Categories (Part 1)”