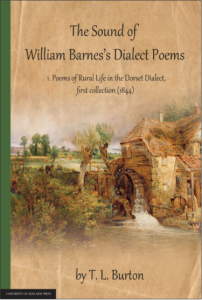 As an online, open-access journal, Cerae seeks to publish and support research which makes use of innovative multimedia components such as video or audio. (We are, in fact, excited to announce that we will shortly be publishing our first multi-media article in the coming months — stay tuned!) As such, we want to take an opportunity to highlight The Sound of William Barnes’s Dialect Poems: Poems of Rural Life in the Dorset Dialect, first collection (1844), recently published by T. L. Burton with the University of Adelaide Press, and freely available online at http://www.adelaide.edu.au/press/titles/barnes-vol-1/.

Burton is the founding director of the Chaucer Studio, a nonprofit organization founded in 1986 by members of the Australian and New Zealand Association for Medieval and Renaissance Studies (now absorbed into ANZAMEMS), which produces recordings of medieval English texts to serve as teaching aids and research resources. Although William Barnes is well outside the temporal scope of the ‘medieval’, his language draws upon a more archaic sort of English; as Gerard Manley Hopkins, one of Barnes’ contemporaries and a poet strongly attracted to Anglo-Saxon poetry himself, styled it, Barnes’s language is “an unknown tongue, a sort of modern Anglo-Saxon”. Barnes’ heavy use of rural dialect in his poems, Burton notes, produces many of the same obstacles encountered by scholars interested in, say, historically-accurate pronunciations of Chaucer’s poems — obstacles which can be overcome or partially alleviated by making the best use of recording technology to complement a textual edition, as Burton has done in his edition of Barnes’ poetry.

This edition of his poems, available in a fully-searchable PDF, includes the full text of Poems of Rural Life, in the Dorset Dialect in its original 1844 spelling, accompanied by a gloss for unusual dialect terms and a facing phonetic transcript. As Burton observes, while many modern editions of the poems are based on the final collection published in Barnes’ lifetime (in 1879), this later version uses a much more standardized spelling, whereas the original spelling — as reproduced in this edition — offers a more helpful guide to pronunciation. The addition of a facing phonetic transcription is also helpful, but the greatest advantage of this edition is that it includes hyperlinks to full-length readings of the original poems in reconstructed dialect. As Burton argues,

It is clear that a pronunciation guide on its own is not enough. Scholars who are not specialists in linguistic studies just do not have the time to study such a guide with the closeness it demands and then to make the effort to put its principles into practice […] The only safe way to ensure that Barnes’s dialect poems will be appreciated by succeeding generations in the pronunciation he intended for them is to publish a phonemic transcript of each individual poem, and to back up the written record with an audio recording that gives voice to the sounds noted in the written record. (xii)

This edition, for the first time, renders William Barnes’ poetry easily accessible to the non-expert reader in the pronunciation they were originally intended to be read in.

Below are two selections from the text, along with the accompanying audio recordings: ‘Jeän’s Weddèn Dae in Marnen’ and ‘The Vâices that be Gone’ [click to enlarge].

The Vâices that be Gone 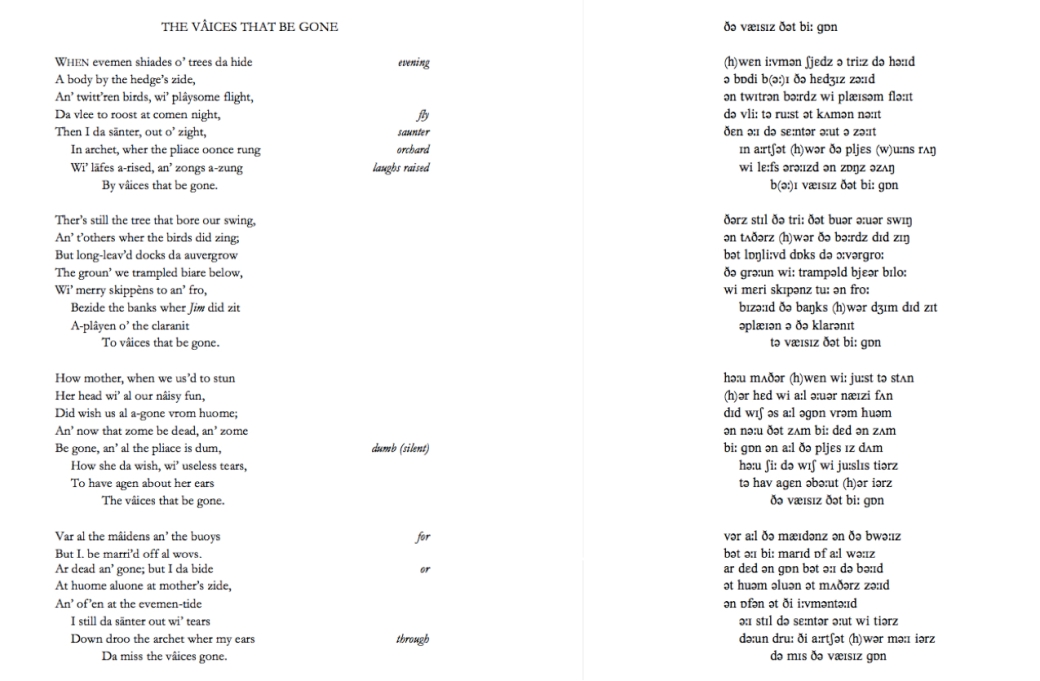 If you know of other recent publications which make innovative use of the online publication format which you would like to see showcased on the Cerae blog, contact ceraejournal@gmail.com.

All articles and reviews published by Ceræ: An Australasian Journal of Medieval and Early Modern Studies are published under a CC BY-NC-ND 3.0 license.