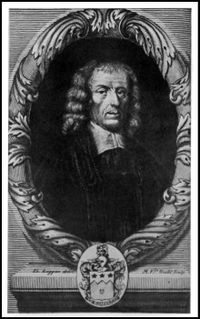 In our inaugural issue, David Thorley (University of Durham) writes about seventeenth-century English philosopher Henry More’s approach to melancholy and his personal experience of the disease.

In this guest post, David considers the problem of biography in history, and the challenge it presented while researching More.

During my doctoral research into seventeenth-century descriptions of personal illness, I spent many an hour in the British Library and the library of Christ’s College, Cambridge, pouring over letters between Anne Conway and Henry More. My principal interest was in Conway’s end of the correspondence and her debilitating, apparently untreatable, illness. How, I wondered, did Conway use her epistolary friendship with More to explore and come to terms with her life as a perpetual invalid.

This was the material that made it into the thesis, but, as I read, I gathered a stock of references to More’s own health. Melancholy in particular seemed to dog him. What might be made of the fact that More, whose philosophical writing treated melancholy as the source of religious delusion and fanaticism, seemed chronically melancholic?

Having received my graduate and undergraduate education in English departments, I was versed in critical reservations about reading a writer’s life into his or her work. I knew, too, that A.D. Nuttall – struggling not to read Milton’s line ‘O dark, dark, dark, amid the blaze of noon’ with the poet’s blindness in mind – had advised: “If in doubt, why not ask the poet? He could help”.

But, my research had taken a turn away from the literary. I was not reading More’s letters and philosophy solely as examples of seventeenth-century epistolary or philosophical prose, but also in their relation to the period’s intellectual history. Could the biographical fact of More’s own melancholy have relevance for his philosophical treatment of the humour?

Here, I was edging into a different and wider argument about the value of life-writing for history. “Can biography ever be a serious contribution to history?” Daniel Snowman asked last year. The answer seems to be yes, but with conditions attached: one of them being that sufficient attention is paid to micro- and macro-historical narratives and their relationship to one another. The macro context of my research seemed relatively narrow (seventeenth-century ideas about melancholy, rather than, say, the English Civil War), so perhaps some modest reflections on the relationship between More’s personal and philosophical melancholy might be made without falling prey to speculation or bluntness.

But the category of “seventeenth-century ideas about melancholy” was not so neatly contained as I had hoped. It was informed by scriptural, medieval and classical sources stretching back two millennia (and I was grateful to the anonymous reviewers of my article for directing me to several I had neglected).

My modest task of illustrating More’s “balancing act” (as Koen Vermeir calls it) between being a critic of and subject to melancholic enthusiasm was immeasurably complicated by this abundance of context. The biographical details posed the bigger problem. More’s philosophy was deeply learned and mostly assiduous in acknowledging its sources. So, when, in a letter, he sought to quell that “burdensome disease of Melancholy” by reminding himself that ”a man may be alwayes chearfull, or make his passions tollerable, if he joyn his minde to nothing of this terrestriall world, but make all thinges an Object of those divine graces and peaces which God has putt into the soul of man”, it seemed reasonable to suppose that he had in mind the words of Proverbs 17:22 that he would later quote in his Discourses on Several Texts of Scripture: “A merry heart doeth good like a medicine: but a broken spirit drieth the bones”.

But what is to be made of anecdotes like the one More tells of meeting Francis Mercury Van Helmont in Cambridge? Van Helmont, More reported, “has a hearte so good, so kind, so officious, so plaine and simple, and so desirous of the publicke good, that the consideration of that in conjunction with something els, putt me into such a passion of joy and benignity, that I could not for my life keep my eyes from letting down teares”. Instinctively, the episode seems relevant to More’s melancholic character, but can intellectual significance be wrung from it?

Probably not with any confidence. But these two examples are taken from the ends of the spectrum; most of the material I was handling fell tantalisingly into the middle ground. It seemed More’s melancholic temper and his scholarly attitude to melancholy bore comparison and, indeed, that the practice of philosophy and his epistolary correspondence with Conway had therapeutic value for his struggle with the illness. But to tease out the precise relationship between More’s life and practice, if it were possible at all, might take a lifetime’s study. I could only offer my conclusions as biographical observations made on the mirco- level, and invite expansion, challenge and correction.

David Thorley received his PhD on descriptions of personal illness in seventeenth-century manuscript life-writing from Durham University, UK in 2014. His next research project is on verse reading, writing and manuscript circulation among the early fellows of the Royal Society.

You can read David’s full article, “The Melancholy of Henry More”, here.

One thought on “More and Melancholy: The Problem of Biography”